10-year-old Heidi was a happy, smiley girl who loved Disney films, being outdoors, loud music and cuddles with her dog, Milo. Heidi was born with the very rare condition, Wolf-Hirschhorn syndrome, meaning she had seizures, heart defects, epilepsy and delayed growth and development, making her completely reliant on a wheelchair. Heidi also had scoliosis (a curve in the spine), which created a lot of stress and pressure on her lungs, causing respiratory issues.

Heidi lived with her little sister, Tilly, little brother Charlie, and mum and dad in Alresford. This is her story. 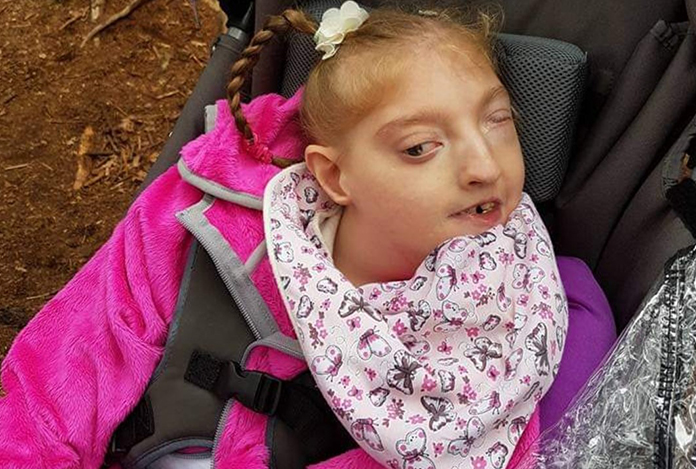 “When we first found out Heidi was due, it was a bit of a shock as we hadn’t been together long. It was exciting, but scary. We had a very normal pregnancy, and Heidi was born at Winchester Hospital at 37 weeks old. We had a normal birth, so the next morning when they took us down to the Special Care Baby Unit (SCBU) instead of discharging us, it was quite a shock. We didn’t get the chance to celebrate having a new-born. Heidi had to have a variety of tests done – they were looking for some sort of syndrome. We couldn’t believe it, we just wanted to take our baby home. She wasn’t discharged from hospital for about four weeks. Within this time, she was diagnosed with Wolf-Hirschhorn syndrome.

“Having Heidi was a massive eye opener – everything had to change, from going out partying at the weekend, to getting trained on what you would do if you had to deal with a seizure. It definitely made us grow up a hell of a lot. I was just 19 years old and David was 21, so it was all very overwhelming. 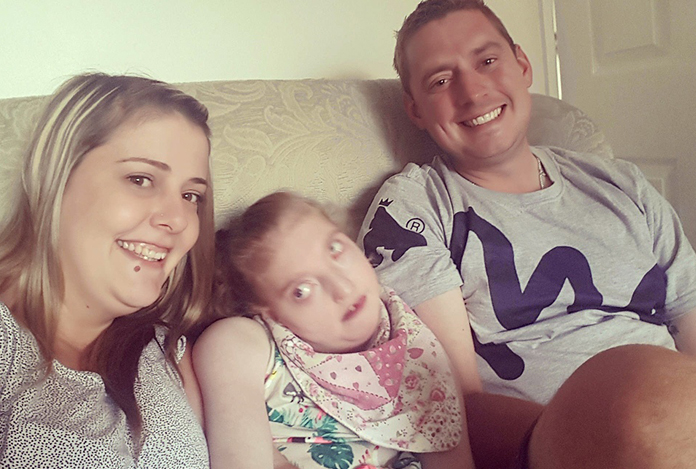 “I think because she was our first child it was normal for us. We didn't know how to look after your everyday new-born. We were taught with Heidi that she had additional needs and that was just the norm.

“At about 18 months old, Heidi got pneumonia. We woke up one morning and her skin looked grey, so we took her to hospital and she went straight to intensive care. She had Sepsis. When your child is laid there, helpless, and there’s nothing you can do for them, it’s just awful. After that she never really fed properly and had to have a nasogastric tube fitted.

“Wolf-Hirschhorn syndrome meant that Heidi had seizures. She had one once where she was fitting whilst she was under anaesthetic at the hospital – it went on for five hours. At the same time, she had chicken pox and, because of her respiratory issues, it ended up spreading onto her lungs, which left her with scarring tissue on her lungs.

"It felt like, you name it, Heidi had it. But looking at her you would never have known, because she was always happy – our little fighter never let it bother her." 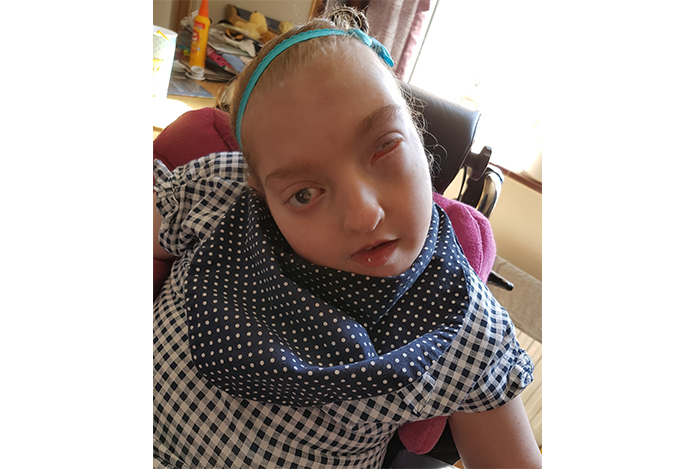 “One day we went into hospital for what we thought was a routine check-up with the cardiologist. He sat us down and told us Heidi had to have open-heart surgery. When Heidi was born, she had a hole in the septum of her heart which didn’t close, and so the heart operation was an ASD (atrial septal defect) closure. Heidi had her heart operation when we’d just had her little sister, Tilly, so it was a very difficult time. 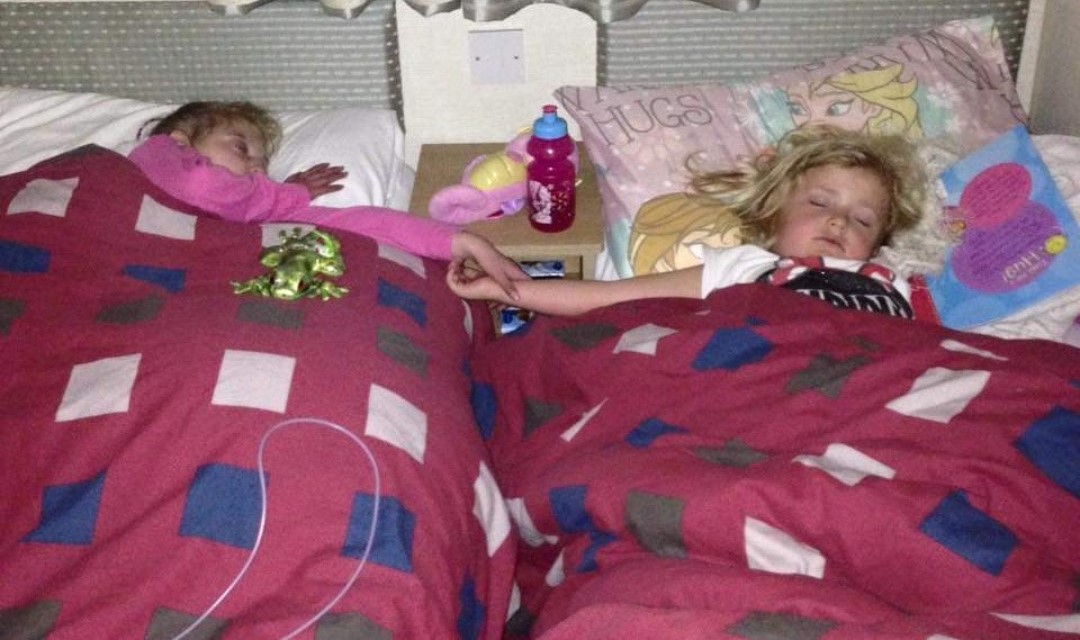 “Tilly and Heidi were so close. Tilly was brilliant with Heidi – if Heidi would dribble, Tilly would wipe her mouth. If Heidi was sat on the sofa, Tilly would be sat on the sofa with her, reading her books. She even helped with feeding. I think even though Heidi was the eldest, Tilly took on the role of the older sister, because having Heidi and her additional needs was like having a baby for the whole ten and a half years – she required 24 hour care. 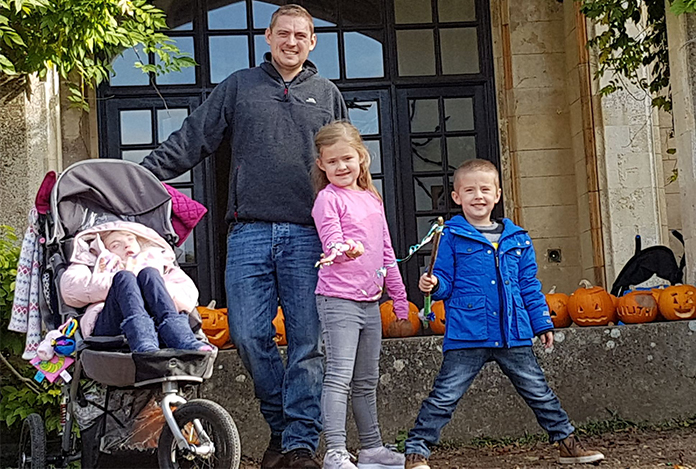 “One of my favourite memories of Heidi was when we were all sat in the garden one summer. Heidi was sat in her wheelchair and David was on the trampoline. When David tackled Tilly and Charlie to the floor, Heidi just didn’t stop laughing! 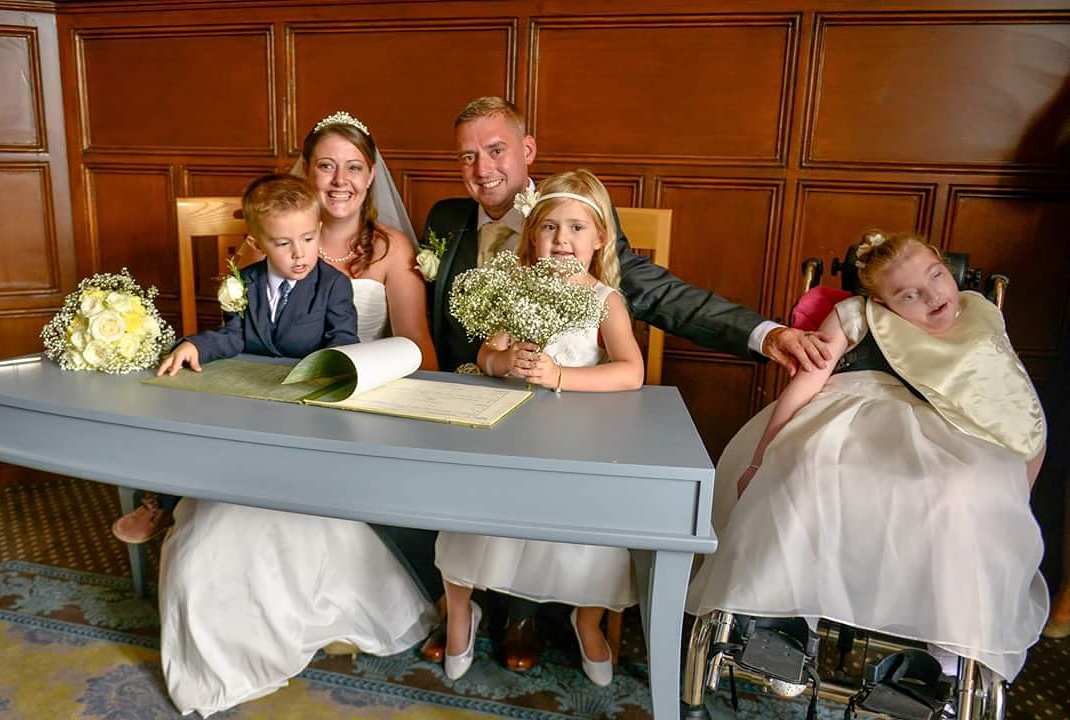 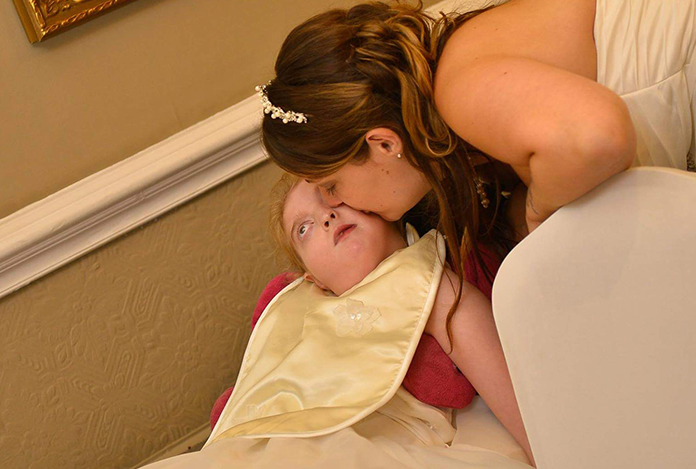 “We were made aware of Heidi's life expectancy. Every time she was ill, we wondered whether this was it – there was always a cloud over our heads and we felt like that her whole life.

“Heidi had about two years when she was really good – she stayed out of hospital for the most part and stayed relatively healthy.

"Then it just happened."

“Her last Christmas was just perfect. It was magical. There was no cough, cold or fever and she was excited the whole day. She was just really happy – in every photo we’ve got of her from that Christmas, she's smiling. 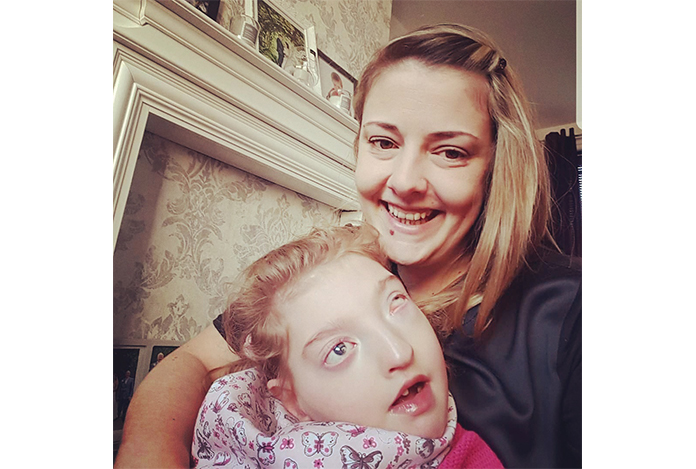 “Heidi died on 5th January 2018. When she passed away we didn't know how ill she was, we thought she just had a common cold.

"She went into hospital on New Year's Eve and then she went downhill. She seemed to be getting better, then all of a sudden, she just crashed. On New Year’s Day we had a serious talk with the doctor, who said that they couldn't do anything for her, and that was it.

“That's the only time in her life I felt like I couldn’t help her. We were telling her that it was ok to go, but she didn’t, she held on for about 25 hours." 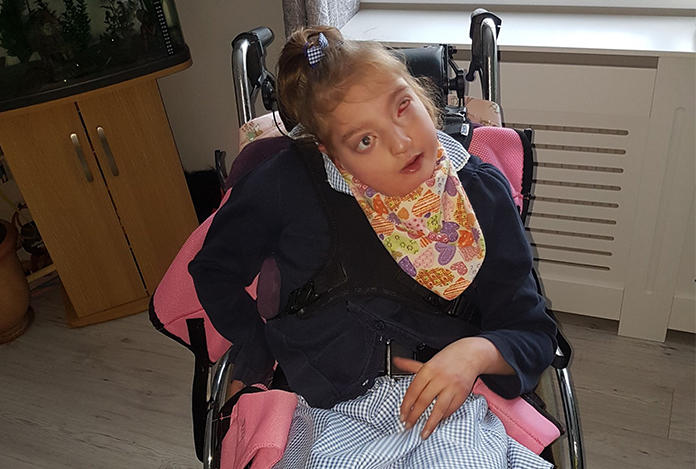 “When she died, she came to Butterfly, the bereavement suite at Naomi House. Everyone there made us feel welcome. They just let us be.

“We needed Butterfly. In my eyes, a funeral director’s isn't always a place for a child. We needed somewhere to go with Heidi where we could spend time as a family, without a time limit. We stayed there for a week – we needed that time with Heidi, the only time we had left."

“The Chaplain at Naomi House suggested it might be good for Tilly and Charlie to see Heidi, because she did just look like she was asleep. Charlie just kept cuddling her, but Tilly walked in, saw her and ran out. She was a bit older and understood a bit more.

“Tilly and Charlie did have a lot of fun out on the care floor when we came to Naomi House. They played the piano, did arts and crafts and helped make an art board of planets – the Play Team were brilliant. We had time to organise the funeral and time with Heidi on our own, so it was good to have one less thing to worry about and to have them distracted from it all. 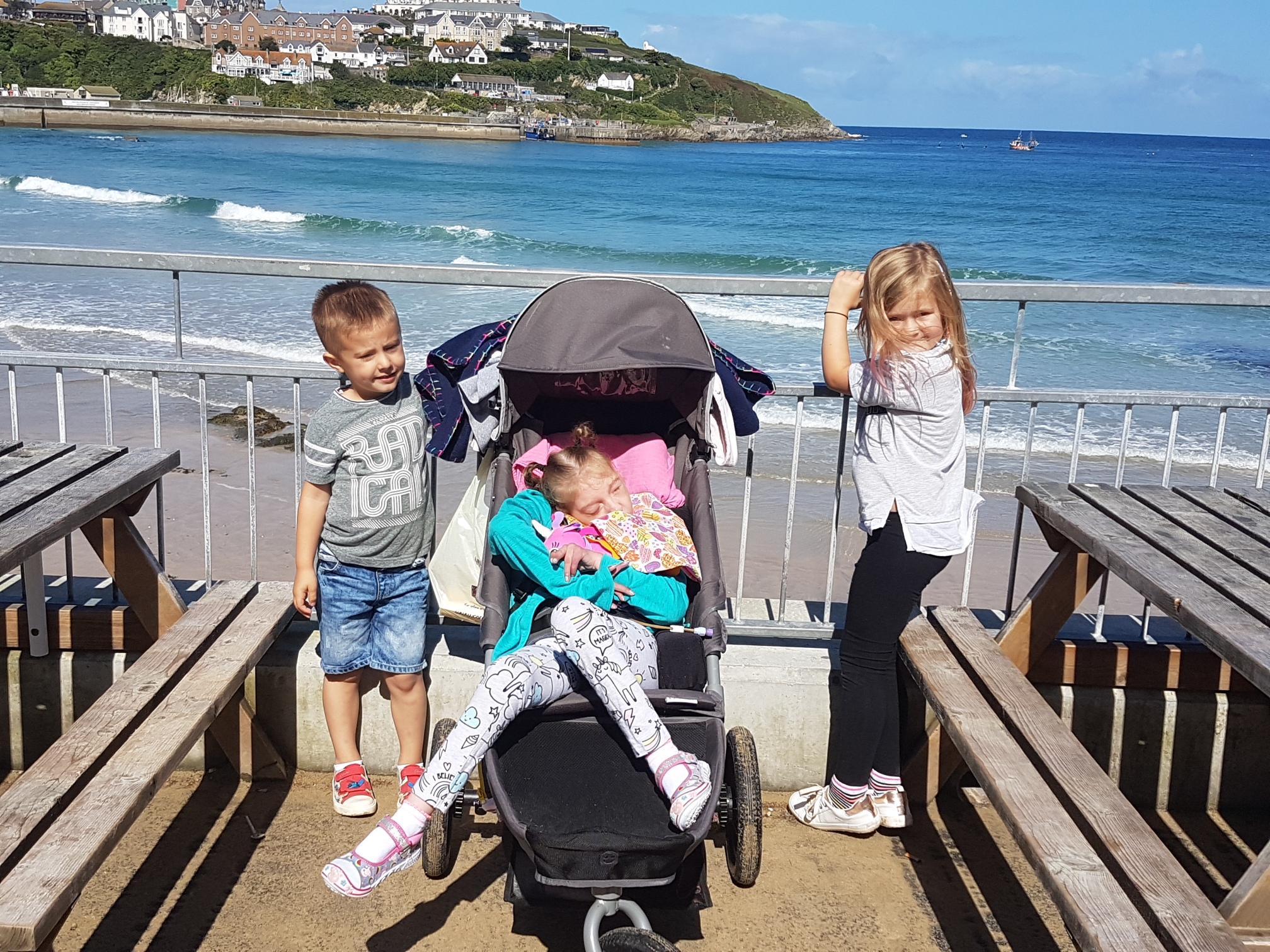 “I think just having those few days to let everything soak in is so important. Even when we left Naomi House it hadn't sunk in properly – it was like being in a bubble. I think you just have to cope with it; you can never get over it. We always knew it was going to happen.

“To have Naomi House and that support is invaluable. It's not until you're in that position that you see what people actually do; you take it for granted. And that's the case with Naomi House – the support they've given us is amazing. Until you've had to go through it, you can't comprehend just how much it means.

“That little girl has made us who we are today. We have been through hell but it's made us stronger as a couple – a lot stronger. Heidi was a happy girl. She was never angry; she was always smiling. She was our happy little fighter.” 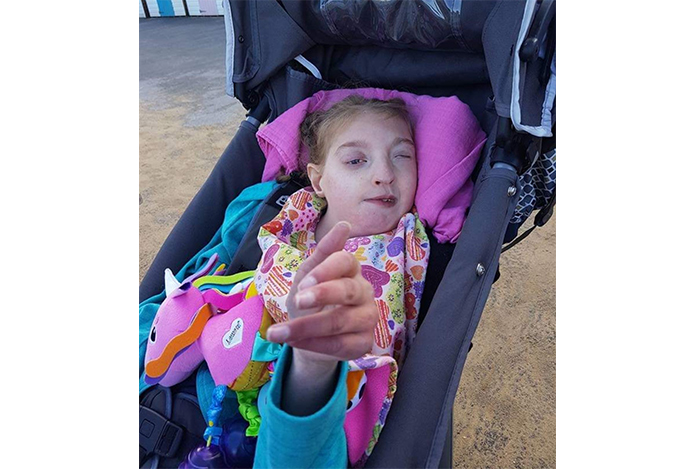