Catherine's mum, Val, tells her family story from the early days of expecting Catherine to the moment she passed away. 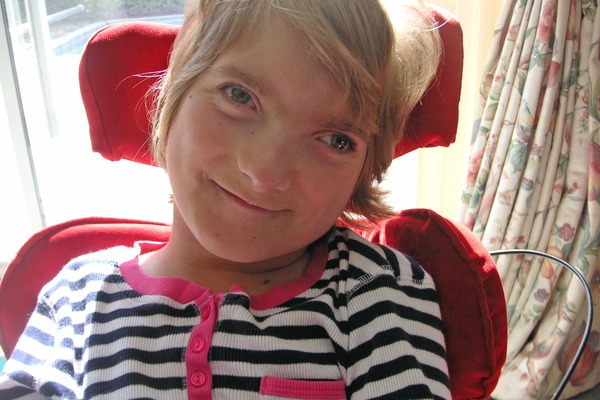 "Catherine was born five weeks early on 2nd September 1999. After many pregnancy ultrasound scans, we knew she was having problems growing and we knew she would be small. She was born early, weighing 1.29 kg (about 2lbs 12oz), breathing independently after a little help and was whisked away to an incubator in Neonatal Intensive Care.

"That day, ours and our 3 year old son’s lives changed forever. As well as parents and sibling we became carers. We suddenly found ourselves in a world out of our control; everything we knew about being parents changed forever. Everything was so different from our experience with Catherine’s older brother, Thomas. At two days old Catherine developed septicaemia, was critically unwell, was suffering seizures and required ventilation.

"We were told to expect the worst, and if she should survive, would probably have brain damage causing problems with mobility, vision and hearing. It was an intense and frightening time."

"She did recover from this episode and her discharge was planned for when she reached her target weight of 4lbs. She left Basingstoke Hospital Neonates after five weeks, and settled in at home. We were very proud of our tiny baby and we treated her as we had done with our son; going out and about as much as possible.

"At four months old Catherine developed a chest infection and was back in Basingstoke Hospital where she spent her first Christmas. By New Year, Catherine was on a ventilator in Southampton Paediatric Intensive Care Unit. She was very slowly recovering from bronchiolitis. However, before being discharged from hospital, we attended an appointment with a Consultant Neurologist who informed us that Catherine was showing signs of brain damage and neuro abnormalities.

"Although she eventually got over this episode, it was not long before we were back in Basingstoke hospital with another chest infection; a pattern that was repeated many times over the next two years.

"Feeding had become even more difficult and could take several hours a day, or after a hospital admission, was via an NG tube. She woke 8 or 9 times a night and cried endlessly. She had days when she was so sick she would have seizures. We were exhausted and felt helpless, as she was clearly in pain, not thriving and not developing.

"When she was 2½ years old, Catherine finally gained the weight needed to have a Gastrostomy (feeding tube) and Fundoplication, an operation which would prevent her reflux and hopefully reduce her chest infections. After the operation, she began to have longer periods of being well. She grew in size and started to enjoy family life; responding to her boisterous brother, family and friends, loving cuddles, music, walks, going to the pub, church and watching rugby!

"At the age of three, Catherine had an MRI scan of her brain. The results were catastrophic and showed her to have widespread brain damage. It explained why her development was not progressing and we were told she would not walk or talk and would have profound learning difficulties.

"This prognosis proved to be accurate, although what no-one could have predicted was the strength of her character, her sense of humour and her unconditional love for family and friends, which lit up the lives of all who knew her."

"When Catherine was 5 years old, our Paediatrician organised for us to have regular respite one night a week at our local NHS respite unit. At last, a night’s sleep a week!

"We were also referred to Naomi House Children’s Hospice around the same time, which became one of the most wonderfully positive aspects of Catherine’s life, especially at the end."

"But having her accepted to be one of their children was a bitter-sweet day - this told us more about her life expectancy at that time than we had ever been told directly.

"We were given an allocation of days to use either as a break for the whole family to stay and be pampered, or to use as respite. But with this came all the guilt feelings most special needs parents will be familiar with, that we needed a break from the frustrations and exhaustion of looking after our poorly little daughter.

"I never stopped feeling sad that we needed respite, or guilty when I left her with Naomi House. My guilt aside though, Catherine loved her time there and she was treated like royalty having a spa break.

"When we rang for updates, we were told she’d had a swim, followed by a hand massage and was now sitting with her feet in a bowl of lentils! She always came home with hand and foot paintings, collages, homemade jewellery and gifts. What more could a child want?!"

"Naomi House was a huge source of support for the family, lots of fun for Catherine, and gave us the opportunity to take Tom away on holidays which we couldn't do with Catherine. They also offered support and activities for siblings - Tom went on a couple of outdoor activity days where he had an amazing time enjoying new experiences and being spoilt rotten!

"Every year I used to save a couple of days to book respite during the run up to Christmas, partly to allow me time to do Christmas preparations and us to go to a party, but also for Catherine.

"Naomi House is truly magical at Christmas. The house is covered with pretty lights and decorations, and of course the great man himself visits. During Catherine's last Christmas, Santa arrived for his visit with real reindeer!"

"There were times when Catherine’s health would stabilise but there was always some crisis awaiting us, or some gradual deterioration we were aware of. Our house slowly filled up with equipment for feeding, medication, mobility, sleeping, hoisting and breathing.

"When Catherine was 11 we noticed that she was starting to snore in her sleep. We naively thought this was rather cute, but the noise grew louder over time until it became obvious that she was struggling to breathe. We were referred to both a respiratory consultant and ENT in Southampton and, after a series of tests, examinations and overnight sleep assessments, we were told she had an upper respiratory collapse caused by her poor muscle tone, which meant her airway was obstructed.

"We were suddenly back in frightening unknown territory, where we needed to make decisions which would dramatically affect Catherine’s future."

"Of the suggestions put to us to assist her breathing, we felt a pharyngeal airway (NPA) would be the best non-surgical alternative. The tube almost certainly gave her an extra two years of life.

"This device meant a whole new level of care was required. We eventually had a Continuing Health Care package (where care switches from Social funding to Health) but we never managed to receive the right care, and at a time when Catherine’s health was rapidly deteriorating, I was tearing my hair out.

"Now we desperately needed our respite days at Naomi House, where the specialisation and professionalism of the nursing and care staff was similar to that in an Intensive Care Unit, but in a caring, homely atmosphere."

"In June 2013, after a normal Friday at school, Catherine had a cold which seemed to worsen quickly that evening. I took her to Basingstoke Hospital where she continued to deteriorate, despite aggressive treatment. We were horrified that it was suggested she may not be resuscitated, should it be necessary. A couple of days later the worst happened and Catherine had a cardiac arrest. Against all odds she was able to be resuscitated, and once stable, was transferred to Southampton General PICU.

"We were told it was likely she would not survive and if she did, she would be further brain damaged and wouldn’t be the Catherine we knew."

"She did recover and was most definitely our lovely Catherine, but never regained her health to the level it was before, and struggled all summer with her breathing. Prior to discharge from Southampton, we were referred to the Palliative Care team and it was arranged for us to go home via Naomi House to help me regain confidence with her care. With the help of their Consultant, we completed a purple form to document our wishes for all care to be given if a similar circumstance should arise, although we were told she would not survive the next chest infection. 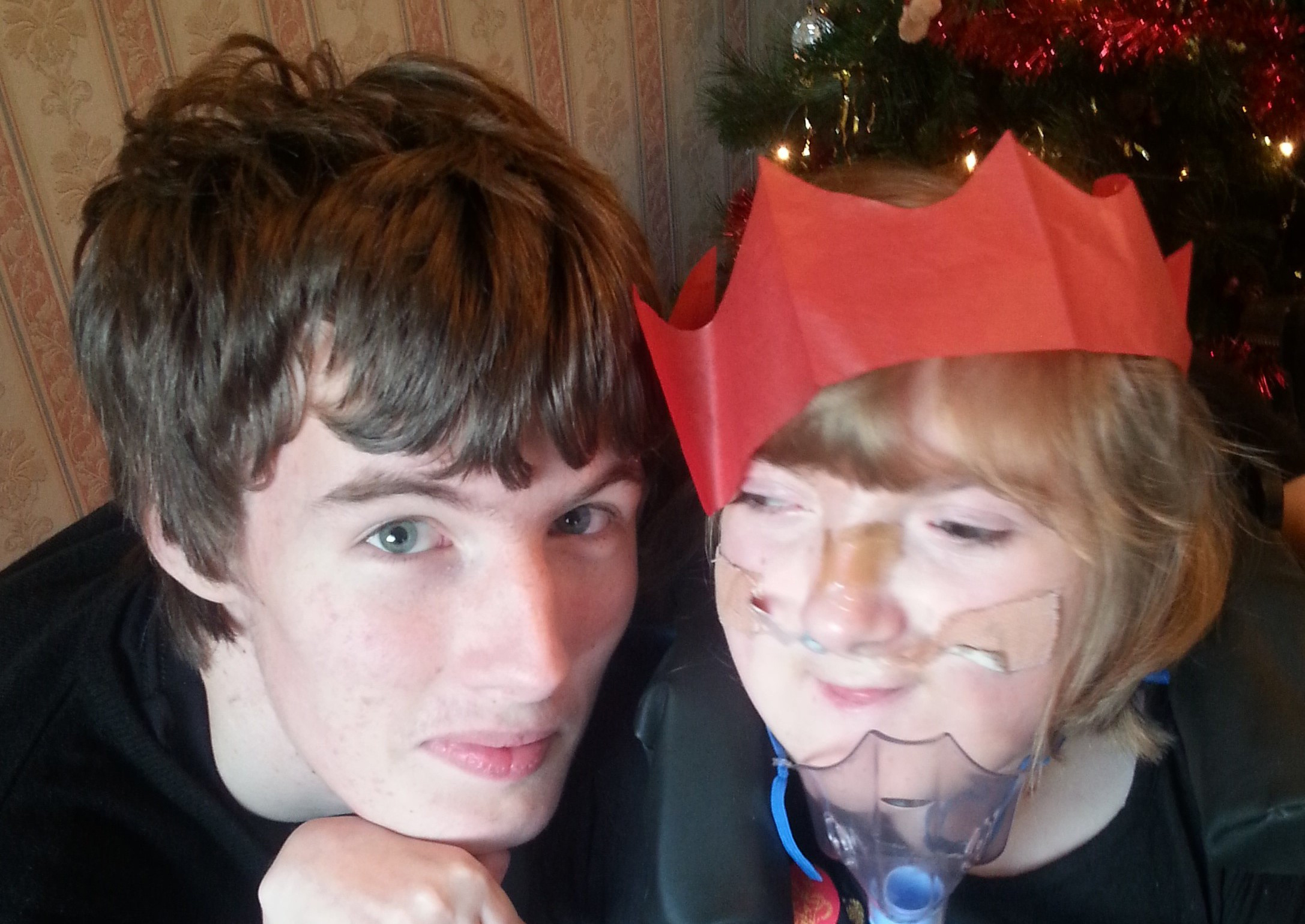 "Catherine’s last few months were really hard - for her and for us. Thomas was approaching his A Level finals at Sixth Form College, and Catherine needed to have one of us either with her or near all the time. I think the term rollercoaster is overused, but does give the correct image of our lives hurtling along a track over which we had no control, involving a few good spells when our hopes would be raised, only to then come crashing down.

"She survived several hospital admissions that last autumn, but all were emergency admissions via Resus and ended in ICU or HDU, and eventually she needed continuous O2 and bipap for periods during the day and at night.

"After each admission we came home via Naomi House and each time they nurtured and supported us to cope with changes and helped us plan our discharge home. Their professionalism and care was beyond wonderful."

"After each episode Catherine recovered less well and by mid-December, she was permanently at Naomi House as plans for discharge were delayed because she was not well for long enough to come home.

"Despite this, when Catherine had moments of feeling better, she was taken down to the lounge for stories, carol singing and other activities. It was wonderful to see how they made her last days fun. Naomi House is a happy place buzzing with activity, both noisy and gentle and adapted to each child’s needs.

"At this time we amended her purple form (after in-depth discussions with the Naomi House Consultant) and accepted the fact that she should not be put through the enormity of another intubation. Here, I need to say that although these discussions were really hard for us, the Hospice Consultant was wonderful and had a clear way of explaining things with total sensitivity, and it was definitely a two-way discussion. He was endlessly patient and gave us all the time we needed to ask questions. 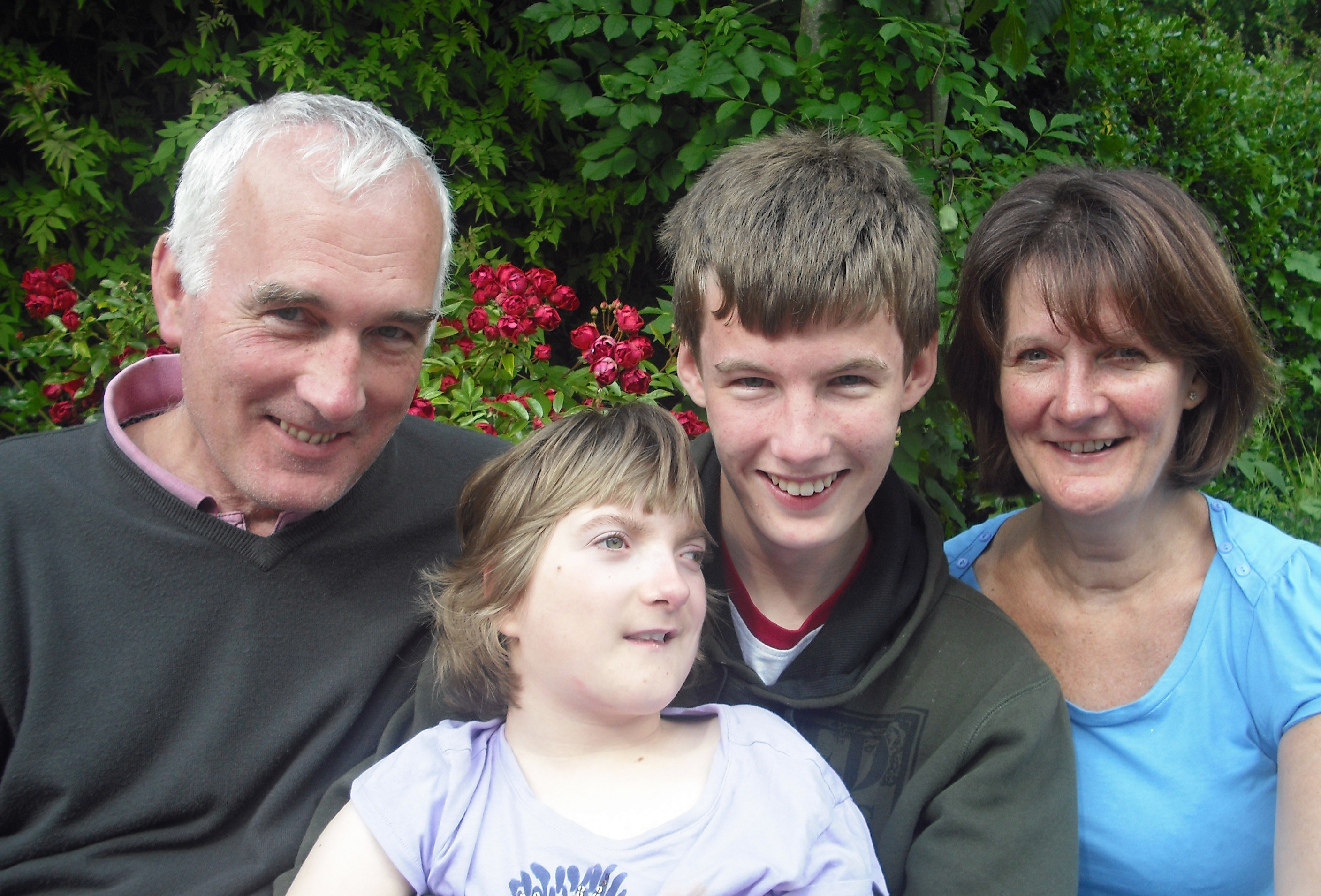 "We eventually came home on Christmas Eve and, with family support, had a wonderful last Christmas Day and Boxing Day, with a lovely few hours with Catherine being smiley and responsive. She went back to Naomi House for a couple of days and came home again for New Year.

"She died in hospital on 4th January, aged 14, after her final emergency admission when really struggling to breathe; her causes of death were pneumonia and cerebral palsy.

"She was moved to Naomi House, where she was taken into their Butterfly Suite, and our family were encircled into their care. They stepped in and helped us organise her funeral (no easy feat on the weekend after New Year) and supported us with all that needed to be done. Their experience and resources helped us achieve what so few people can help with - the organisation of a funeral for a child.

"They also helped us with memory making; foot and handprints on canvases and locks of hair. A contact with a local jewellery maker who visited us at Naomi House meant that I was also able to order an engraved silver charm with Catherine’s finger print on it.

"Naomi House really were there for us during the good days, difficult days and last days and we cannot thank them enough for years of being there for Catherine and our family."