Evie was a happy, sociable and friendly girl who loved life. She had a progressive neurological disorder known as Labrune syndrome. Her condition caused a gradual deterioration in her health and sadly, in June 2020, she passed away at just 12 years old. This is her story.

Evie was a happy and extremely sociable, friendly girl who loved life – she was a participant, not a spectator.

Evie had a progressive neurological disorder known as Labrune syndrome (leukoencephalopathy).  The condition caused a gradual deterioration in her health and sadly, in June 2020, she passed away at the age of just 12. Her dad, Simon, has bravely shared the last few days of her life.

“Evie’s health had slowly been deteriorating for the last few years as Labrune Syndrome began to take hold. More recently during lockdown, she had a few instances of sickness. We put this down to her diet.

"At about mid-afternoon on the 16th June, after a 'normal morning', she started crying when we were outside. I mistakenly thought she was too hot so we moved into the shade and then onto her bed so she could rest. Soon after, she started to be sick. We were concerned at this point, but as she often went through periods of sickness, we were just keeping an eye on her. Her condition deteriorated rapidly and we noticed that her eyes were looking in different directions and a rash developed on her body just before she was about to be sick. It was then we dialled 999. They came and assessed her and left it down to us if we wanted them to take her in to the Queen Alexandra Hospital. She then vomited again whilst they were there and they decided she should go in.

"As we were about to leave the house we gave her emergency meds to settle her down. Very soon on reaching QA things took a drastic turn for the worse. She stopped breathing and staff gave her CPR, eventually under sedation putting a tube down her throat to help her breathe. The CAT scan showed enlarged ventricles, so we were transferred to the Paediatric Intensive Care Unit (PICU) in Southampton. Two drains were inserted to help alleviate the pressure on her brain that was caused by the cysts which had been forming in her brain due to the Labrune’s syndrome. 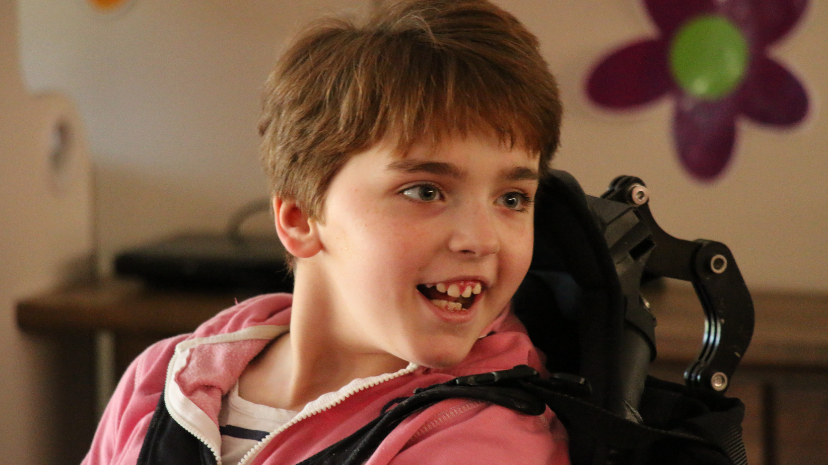 In my mind, we lost her that night, as she never regained the ability to hold our hands or smile at us which, to those of you who knew her, was a big part of who she was.

"After an MRI scan, we (Caroline, Isobel and myself), were taken to a room with lots of professional people in to be given the bad news. The damage that had been caused in this recent episode was catastrophic, meaning her ability to breathe for herself would probably not return and she would, as a result, have more brain damage than previously. She was stable but very poorly and the decision was left in our hands; to wait and see what happened, or to withdraw life support. During this time, PICU staff were brilliant in all aspects. Attentive to our needs and did everything to accommodate us, as much as they could with respect to Covid.

As a family we made the incredibly difficult decision to withdraw life support. This was not a life that Evie would want. She was always at the centre of things and loved to be involved in everything. She was a participant in life – not a spectator.

"We had decided to donate Evie’s organs, so on Tuesday morning, we said our final goodbyes to Evie in the theatre anteroom, so that as soon as she passed away, they could take her into theatre to start the process. The ventilator was removed and we spent our final few minutes together.

'We left Evie in theatre and made the journey to Naomi House where we were welcomed with a hot lunch, none of us wanted to eat, but it was just what we needed.

"The hospital brought Evie to Naomi House after the operation had finished. We were thankful to Naomi House for allowing us to stay in the room across the corridor - we were able to go and spend time with her at any time we wanted to. We could just go and sit with her or spend time together as a family and begin to think about what happens next.

As always, Naomi House staff were very understanding leaving us time to grieve as a family unit, but were on hand if needed.

"They were able to provide us with some resources regarding funerals, readings, poems etc which was really useful.  It’s not the sort of thing you know anything about.

"When we were ready, they made the arrangements with the funeral director to come and collect Evie. We then made our way home – something which we were dreading.

"We had a cremation for Evie and were allowed 30 people at the ceremony, which was lucky, as the previous week it was only 18 (due to Covid 19). This meant all of the family could attend, however, Evie was so popular, we would probably have had nearer 100. People were waiting to see the funeral cortege near Park Gate School with bubbles and windmills, there were lots of people outside the crematorium, including therapists and staff from St Francis School. Also for those who could not be there, it was broadcast online.

"Three months on and it has not got much easier to accept, but she has left us with lots of happy memories of good times." 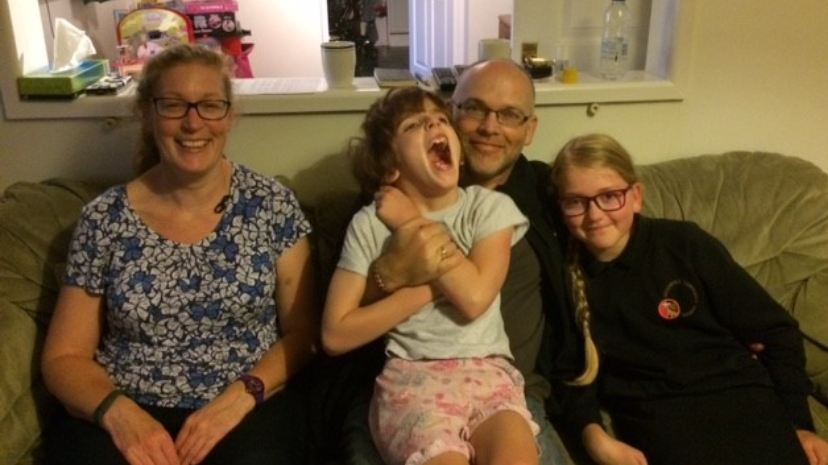 Naomi House & Jacksplace are there for families when they just need a break, knowing that their children are safe and having their own special holiday. We are there when families need someone to talk to, when life can seem just too difficult. And we are there when that last day comes.

Evie lives with her dad, Simon, mum, Caroline and 12 year old sister, Isobel. Due to the complexity of her progressive neurological disorder, Labrune Syndrome (leukoencephalopathy), it took doctors a long time to be able to give a diagnosis, but it has now been established that Evie’s condition is caused by a faulty gene. Evie is unable to walk or talk and is fed by tube into her stomach. 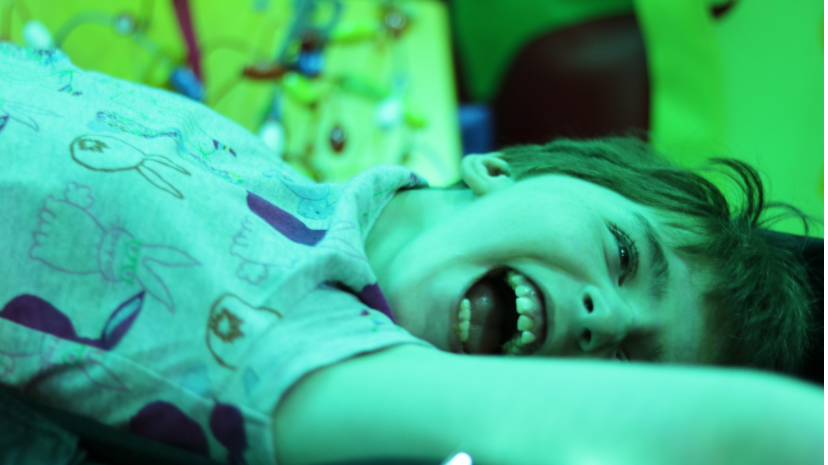 Evie is full of beans and everything is a laugh. She has such a positive attitude and she doesn’t moan - she is a little trooper.

“As things deteriorate, you think what is going to be next?  We can see the effect it has on people who haven’t seen her for a while and it makes us realise that yes, she is getting worse, quickly. We try to shut off that side of things and think right, let’s deal with what we’ve got, otherwise we wouldn’t get through the day. You try not to think long-term about how it's all going to pan out.

Knowing that we’ve always got that buffer and a bit of chill time really helps, it’s our salvation. There is always help for the whole family.

“We live day by day.  We try not to think too much about the future - we deal with Evie’s situation on a day to day basis.

"Without Naomi House and the dedication of the staff, we would not get an opportunity to spend some quality time with our other daughter, Isobel, and do activities which other families take for granted."

Thank you so much to Simon and his family for sharing their family story with us, and for bravely sharing her last few days with us. 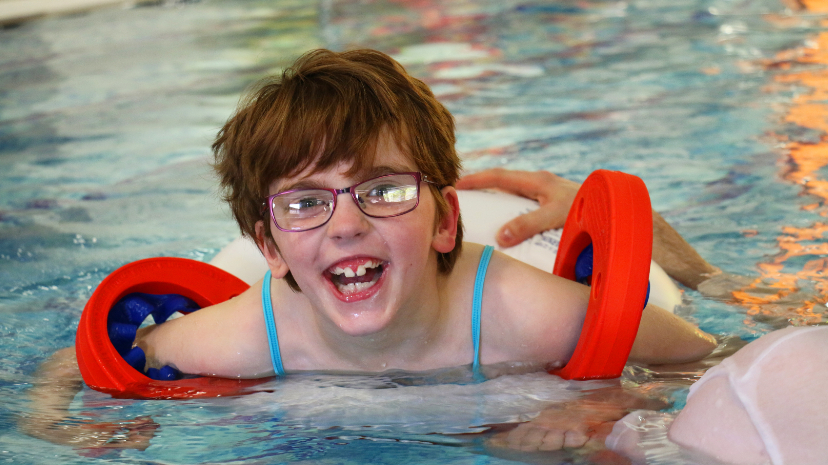 Thank you for reading Evie's Story

Help us be there for families like Evie's on the good days, difficult days and last days, by leaving us a one-off or regular donation today. Click below to find out more. Thank you.