Five year old Bruce is a happy little boy with a smile that will brighten anyone's day. He's been visiting Naomi House since 2017 and everyone loves his cheeky grin. 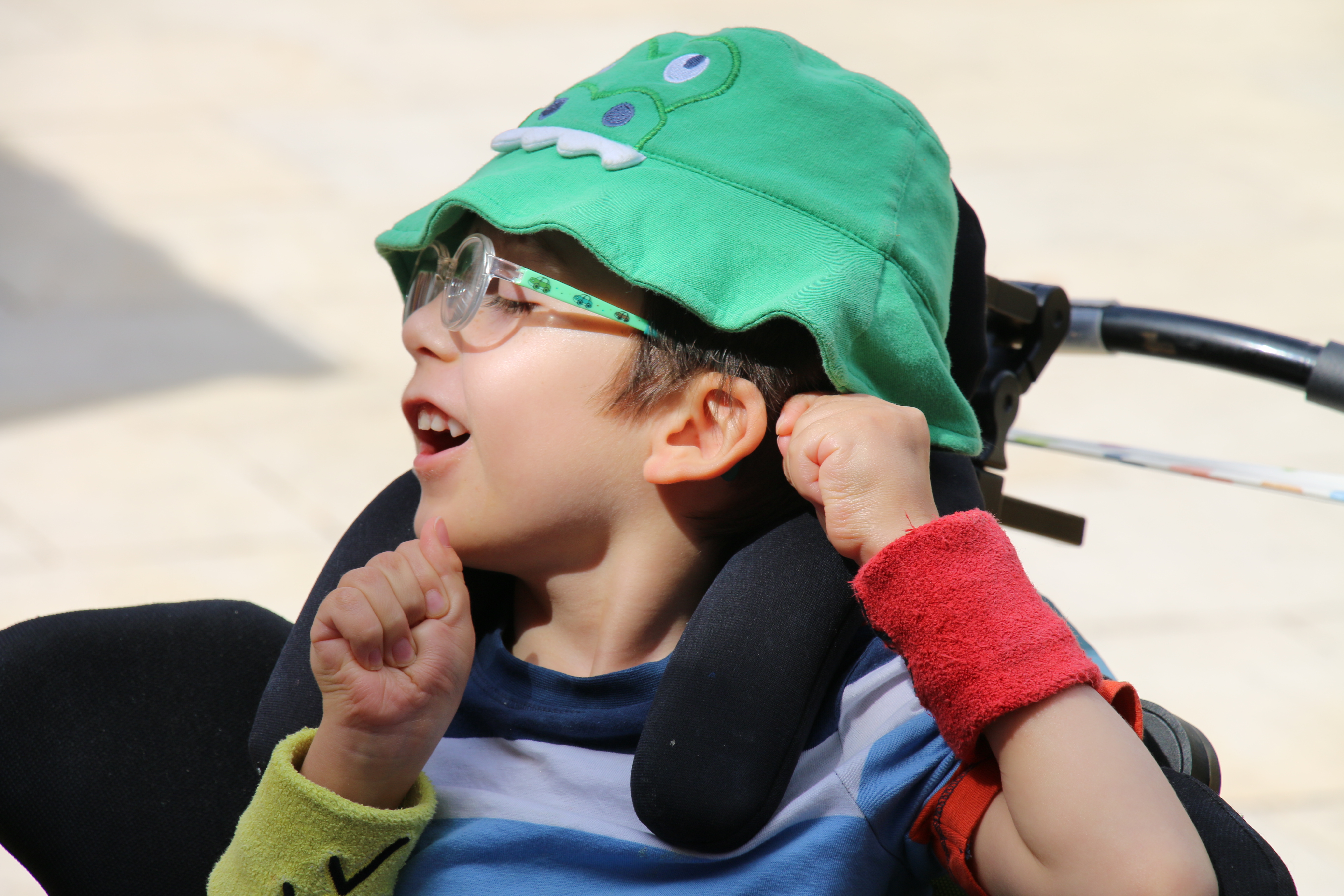 Bruce has severe bi-lateral cerebral palsy, meaning all of his muscles and limbs are affected. He has no independent mobility and is completely dependent on others for doing everything, from the simplest things such as holding a toy, to all of his medical and personal care needs. His internal muscles are also affected, which causes an unsafe swallow and so he is fed via a tube.

Bruce also has epilepsy, and although cerebral palsy makes life incredibly difficult and makes him prone to chest infections, his seizures have been the biggest challenge. These are what triggered the family to ask for a referral to Naomi House. They had fundraised for Naomi House before Bruce was born, and were very aware of the hospices.

“When Bruce was two, he had a big seizure and ended up in Southampton intensive care unit. After that he was having lots of strange movements and jerks which we eventually discovered were different types of seizures - they were really horrible for him.

“We had a baby monitor at night so we could hear the change in his breathing pattern. My husband and I were both listening constantly throughout the night, which meant we weren’t really getting any sleep. So when Bruce was around 3½, we asked our community nurse for a referral to Naomi House.

“For the first visit, he came for an overnight stay and we stayed in the parents’ accommodation. Bruce was quite happy with the carer; playing and doing activities, we didn’t know what to do with ourselves! Normally one of us always has to be doing something, whether it’s preparing medication or meals, or playing with him, as he is unable to entertain himself. We ended up going for a walk and to the local pub to have some food! 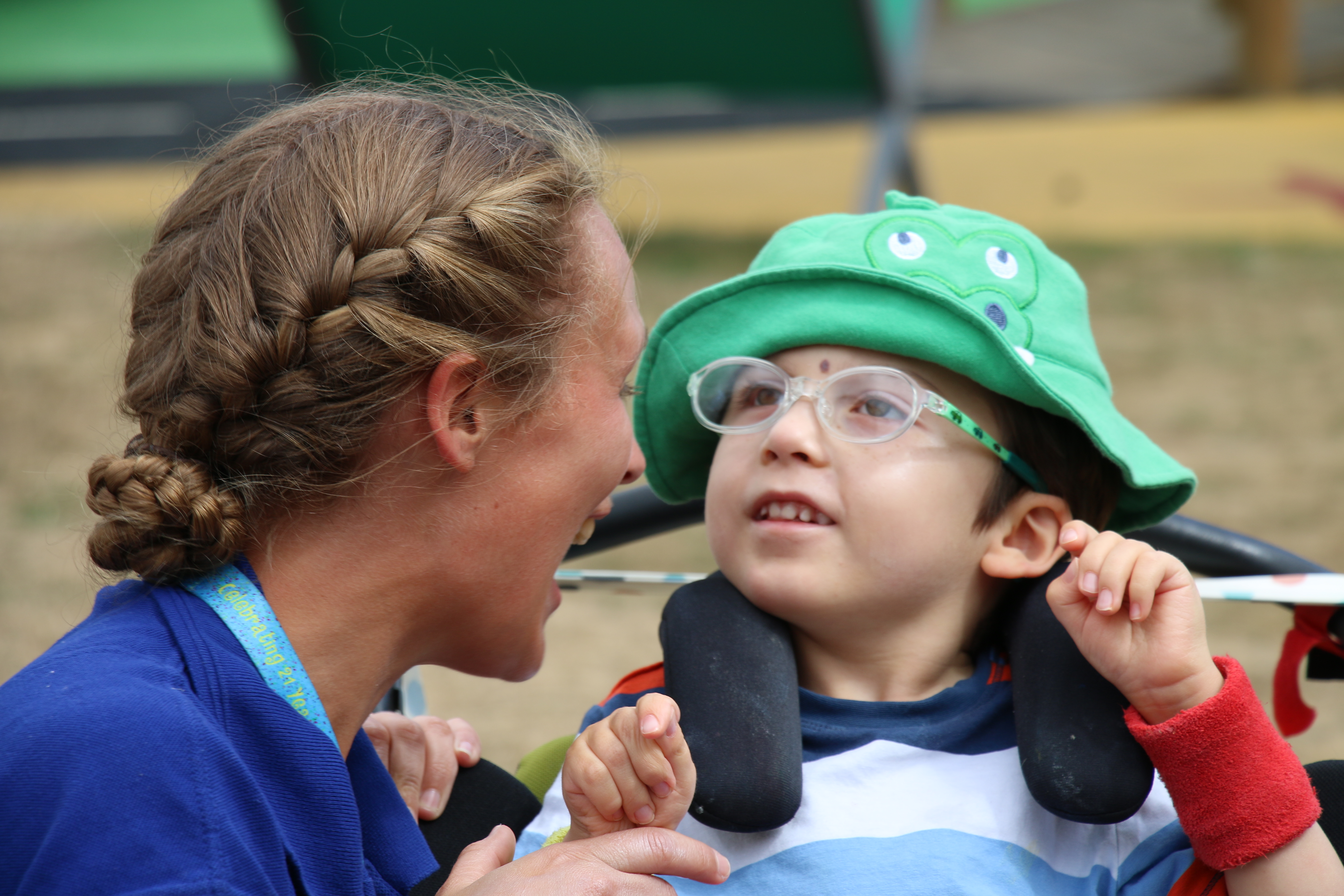 “The first time we left Bruce overnight was just strange and a little bit sad because our house felt empty and odd. We phoned, I don’t know how many times, but the staff were fine with this and gave us updates on what he had been doing. We've got used to it now and we know he is having a nice time and lots of fun. He loves the art, the swimming, the stories, singing, dancing and he even likes the animals that come to visit - although not the ones that make sudden noises! 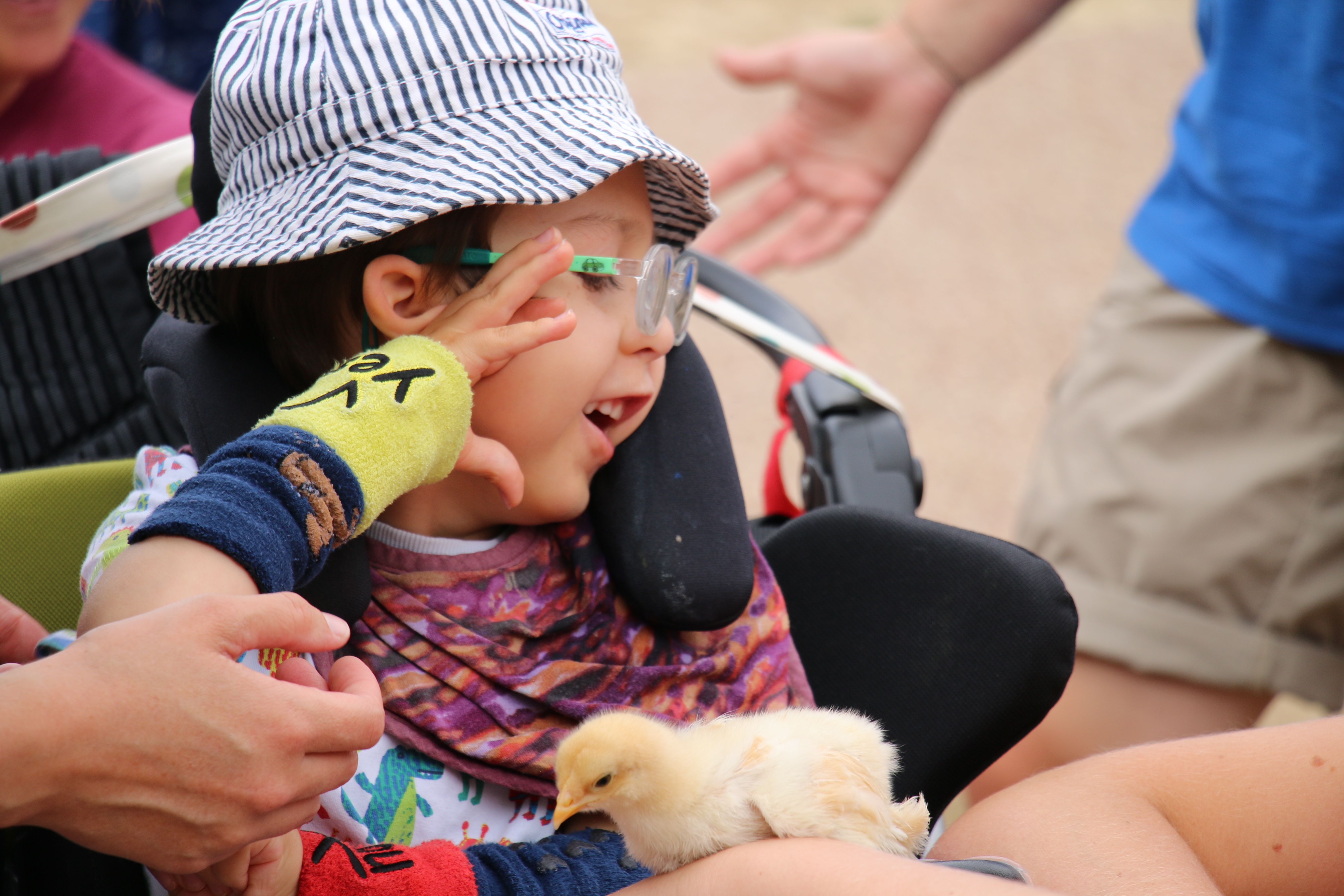 “Bruce is really very expressive and although he is physically really affected, he can communicate quite well. He can’t talk, as his condition affects his muscles and he also has a learning disability as part of the cerebral palsy, but he is very vocal. If he is unhappy he will moan and cry, but if he is happy, he is very smiley; you can see it in his eyes and he makes little happy noises. He’ll indicate by eye pointing, facial expressions and he will try and swipe at things - in a slightly uncoordinated way. It is important to have people who understand his way of communicating, and the way the care plan is done at Naomi House seems really well set up so that everyone has his notes, his history and they know how he works.”

Bruce is fed through a tube directly into his tummy and generally children are prescribed a liquid formula, but parents, Claire and Scott, made the decision to try and give Bruce a ‘blended diet’.

“Most children with a peg or a button end up having formula.  But now more parents are moving towards blending real food and giving children meals, rather than ‘feeds’.  Bruce copes so much better with blended food than with formula and it is amazing that Naomi House will blend what everyone else is eating.

"It is very unusual, very rare and it is massive for us." 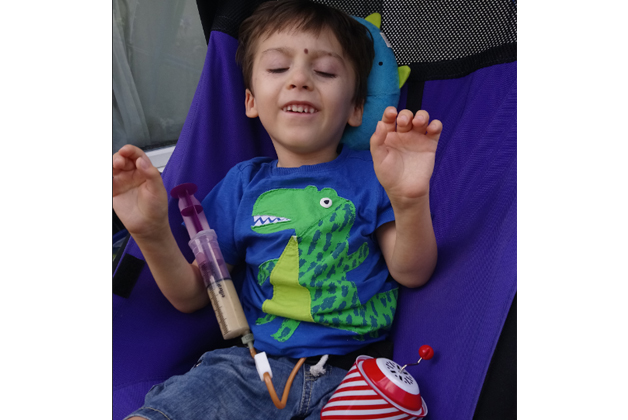 “There are a few things that don’t blend very well, like chips and pasta, they tend to stodge up a bit! Other than that, they give him what everyone else is having, meat, vegetables and pudding.

"When we came to Naomi House and found out they were able to blend it for us, it was is incredible. Bruce is so much happier and healthier with real food."

"He loves to look at it, smell it and he can even sometimes have a little taste too. He loves everything about the food apart from physically eating it because it is just too difficult. As a parent, you want to know your child is having the best experience.

“Caring for Bruce does get exhausting. We have times when we’re having a good sleep and are feeling energetic and then we go through patches when we’re exhausted. But the tiredness is always there because there is always something to be done. It’s part of being a parent anyway, but generally people know as their children get older they will get more independent, but we know that as Bruce gets older and bigger, we will all need more support. It is tiring, but being able to bring him to Naomi House for a few days at a time just means that we can have some rest and a little bit of down time and then be ready to get back to it. 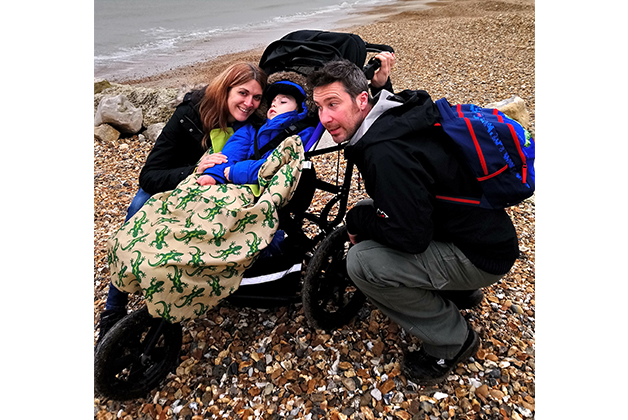 “A long time ago I accepted his issues and accepted him for who he is. When he was a baby, we grieved for the child we had expected to have and I think a lot of parents in our situation go through a similar process.

"He has got his personality which is unique to him. He is very cheeky, he knows what he wants and he is very strong willed. You can ask him questions sometimes and he’ll give the wrong answer or he’ll look at his ‘no’ band on his arm or raise his ‘no’ hand and the ‘yes’ hand. He’ll say no in his own way and then do a cheeky smile, and he knows perfectly well what you have asked him should be yes. He is very playful. 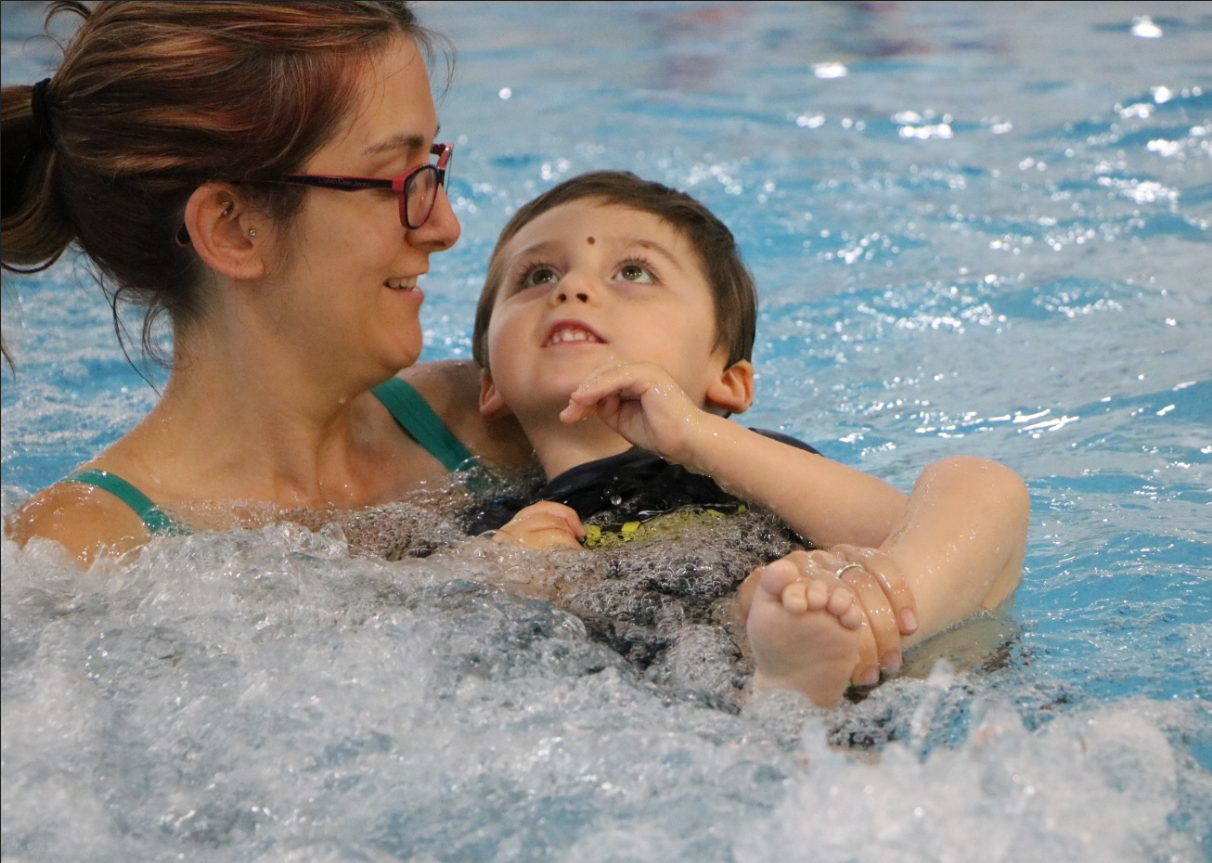 “I have had many people over the years say ‘I don’t know how you do it, we couldn’t do what you do’, but everyone could and would in our situation.

"At the end of the day, we have got a lovely little person who we love, he loves everyone and everyone loves him!

“It is such a relief to have somewhere where Bruce is going to be safe, understood and entertained. Somewhere he is at home, where he is going to have a great time with people who know how to look after him, how to communicate with him and where we feel comfortable leaving him. Naomi House is amazing for us as parents and for Bruce.”

Help life limited and life threatened children just like Bruce by donating below. Thank you.