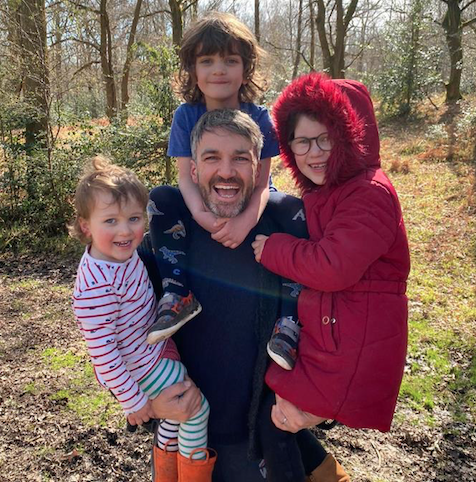 Long term supporter and friend to Naomi House & Jacksplace, Dave Holby-Wolinski, is taking on another epic charity challenge - climbing Mount Everest on his stairs with his kids on his back!

Dave started the challenge on Saturday 9th May and is hoping to complete it by Sunday 31st May. To complete the challenge, Dave will need to climb 52,047 stairs (3,717 stair flights in total) to scale the equivalent 8,848 metre summit height - his target is just over 150 stair climbs a day.

When asked why Dave decided to take on this challenge for Naomi House & Jacksplace, he said:

“Like many people across the country, I was so utterly inspired by Captain Tom Moore and felt I really needed to do something to show my support. I thought it would be great fun to have a climbing challenge without the risk of an avalanche, so I decided to do the Mount Everest Stair Climb! The highest I’ve ever climbed was Ben Nevis and that was a challenge in itself - I’m in awe of anyone who has taken on the real thing!

“Back in 2015 we had a tour of Naomi House & Jacksplace and were simply in awe of the amazing work they do. It’s a charity very close to my heart. We’ve been supporting them for over five years now and we’ve tried to take on as many silly challenges for them as possible!

“My favourite Naomi House challenge was the seven marathons in seven days that I took on with my co-director, Paul. We trotted around together in a viking ship, dressed like vikings and, despite all the blisters, it was one of the best weeks of my life!”

We asked Dave about the inclusion of his family in his stair climb and he said:

“I’m based in West End in Hampshire where I live with my wife, Lara and three children, Saskia, Rupert and Gabriel. I’m so used to carrying my children up and down the stairs that I thought I’d include them in the challenge! I thought it would be fine but you really start to feel the weight after the third stair flight! Our seven year old is the biggest challenge – she’s wonderful but her legs are so long now that it’s a bit of a logistical nightmare!

“Normally, the kids will take a different toy or a snack to eat whilst I’m running them up and down the stairs to keep themselves entertained. I love talking to them as we’re doing it but I’m normally a bit out of breath after the first 20 flights! It’s also just been lovely having a cuddle with them, despite the backache!”

When asked about his progress, Dave added:

“It’s slow going and much harder to eat up the metres than I originally thought but I’m chipping through! I’m currently on 978 metres and I try and tackle just over 125 flights of stairs a day – sadly going down stairs doesn’t count but I still always have one of our little ones on my back!”

Dave has already gone above his ambitious target of £1,000, which is absolutely incredible. When we asked him how he felt about this, he said:

“I’m so proud and pretty shocked! It’s such an amazing charity that people never need much encouragement to donate, so I’m so hoping we can keep that momentum going. Support from family, friends and colleagues has been fantastic - I’ve quite rightly been mocked but it’s all been done with love!

“I’m simply in awe of the amazing work Naomi House & Jacksplace do - the incredible support they offer to families is utterly inspirational. They deserve everything we can do to fundraise for them and so much more.”

We are in awe of Dave and the phenomenal, fun and wacky challenges he comes up with and his utter dedication and support to our charity. Dave - thank you so much for your continuous brilliant support.

Please help show Dave our joint appreciation for his epic climbing challenge by leaving him a donation on his JustGiving page here:
www.justgiving.com/fundraising/mount-everest-stair-climb