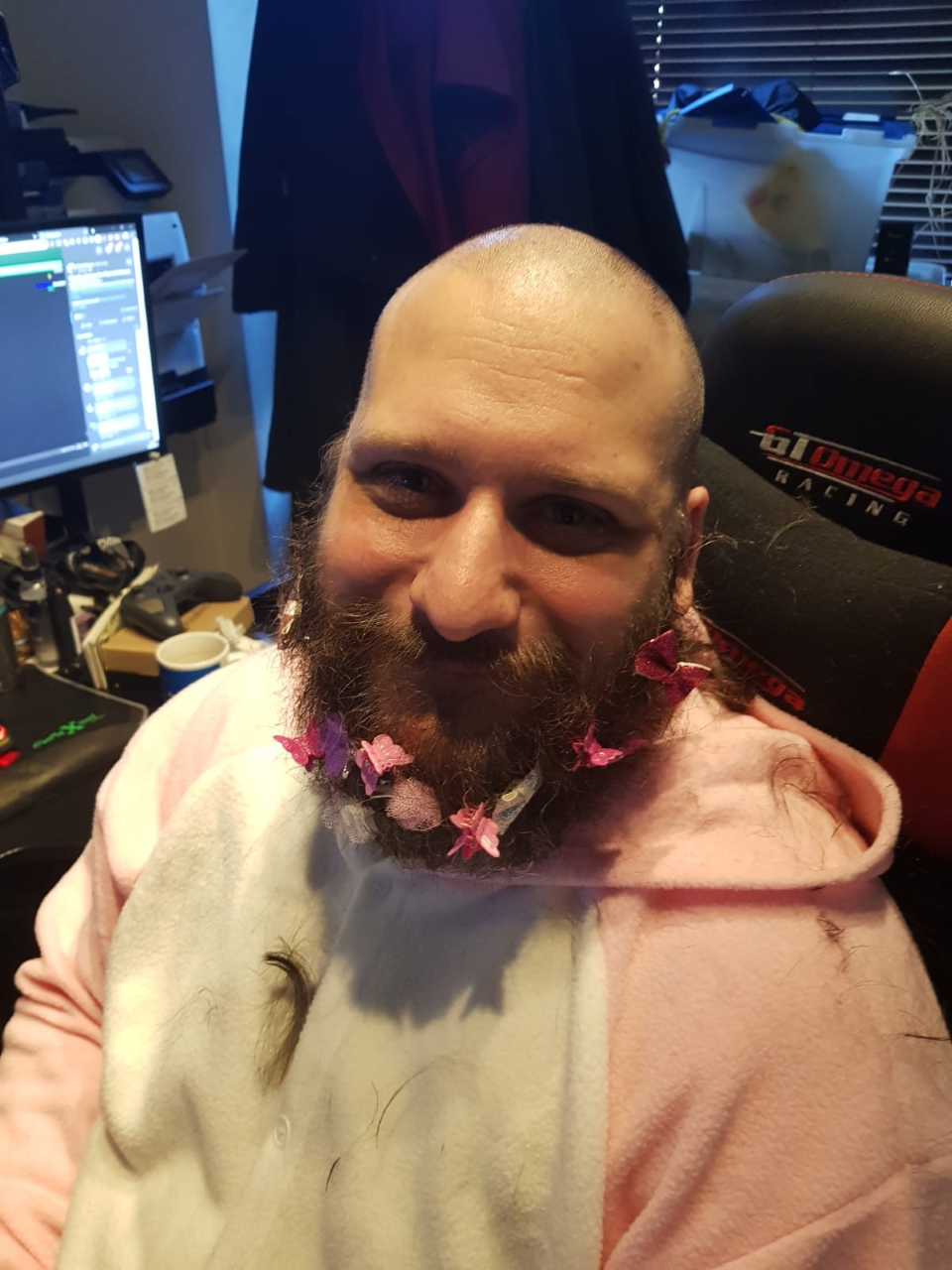 Dan Davies and Callum Spawforth, both employed by Portsmouth-based company Ultracomms, completed a 24-hour gaming marathon to support us as we are the chosen Charity of the Year 2020 for Ultracomms.

Their live gaming stream took place from 18th April to 19th April. They both gamed remotely in their own homes, communicating online via Twitch, where their gaming was being streamed live and over 300 people tuned in to enjoy the stream. To encourage more people to donate, the pair set themselves fundraising targets with forfeits that Dan would have to complete once the target was reached. Unfortunately for Dan, this included a head shave once £1,000 was raised, which Dan bravely carried out on himself leaving him with a new hair-do to continue the rest of the stream with!

You can watch the moment he shaved his head here...

The other fundraising targets were when £200 was reached, Dan had to have a full face of makeup applied. When £400 was reached, he had to dye his beard pink and when £700 was raised, he had to put on a unicorn onesie outfit to wear for the remainder of the stream.

Dan Davies, who is the Infrastructure Manager at Ultracomms said:

“I am totally overwhelmed and overjoyed that we met and exceeded our goal by over 100 percent and would love to thank everyone for all their support. I've been gaming since I was a kid playing on my spectrum and it’s my main hobby beside Airsoft, so when I saw the Game On campaign for Naomi House, I knew it was something I could do. I honestly didn't think we'd quite reach £1,000 but my friends were keen on getting me to shave my head so they clubbed together at the end of the stream and made sure it was done! I'm just glad we did it and the support was beyond what I expected, so thank you!"

Dan was joined throughout the live stream by his colleague and friend, Callum Spawforth, a software developer at Ultracomms. He said:

“I was aware of Naomi House & Jacksplace beforehand, and have a huge amount of respect for the work that they do as a charity. This just seemed like a great opportunity to support that work, doing something I enjoy! Plus, of course I had to do everything in my power to get Dan’s head shaved.These days, I’m mostly involved in game modding and development, with nowhere near as much time as I’d like to have to just play, so Game On was the perfect excuse to game for 24 hours! I’m so happy we managed to raise as much as we did for such a fantastic charity and thank you to everyone who contributed!”

“Ultracomms have honestly been a dream to work with, they clearly don’t do things half-heartedly. Dan and Callum’s Game On stream was a perfect example of this, as they gamed for 24hours straight, more than doubled their fundraising target and even managed to force Dan to shave his head! Ultracomms have completely got behind Naomi House & Jacksplace and with everything that is going at the moment, it is so reassuring to know that we have friends like this.”

You can show your appreciation to Dan and Callum and support Naomi House & Jacksplace by leaving a donation on their JustGiving page here: https://www.justgiving.com/fundraising/dandgameon