We spoke to owner, Katie Black, about her lockdown fundraising venture...

“My name is Katie Black and I'm based in Laverstoke, just outside Whitchurch. I launched Cookery Doodle Doo in North Hampshire in March 2014, so it's just over 6 years old now. I started as the first franchisee of a tiny business which grew over a few years, but when the owner needed to change career about 2 years ago, myself and two others (based in Cheltenham and Silverstone) took over and now we jointly own it as a private business. The North Hampshire branch is mine, with just me doing everything.

“I also started a tiny sister business called 'Doodle Doo Partyware Hire' last November - I was becoming increasingly concerned by the sometimes unavoidable use of disposable packaging by the cookery school, so I decided to try and offset that by hiring out my equipment when it isn't in use to reduce the need for disposable plates, cups, bowls etc. at parties. Every hire results in a £5 donation (half of the basic fee) for Naomi House and so far we've raised £40!

“I originally came from a blue-chip corporate background and community investment was part of our DNA. When I started my own business, part of my assumption even before I launched it was that I would always have some kind of charitable support running alongside.

“I already knew about Naomi House & Jacksplace from living locally. The fact that it was a local cause dedicated to children and doing such a fantastic job made it a no-brainer for me, and I've been a supporter ever since.

“I started out with preschool classes (still my most popular sessions) but I didn't want to fill a hall with children and risk the parents taking over the cooking - I wanted small sessions where I could work with and teach the children myself in my own kitchen, whilst the parents could sit and watch, chat, look after any younger siblings and generally have a little break in adult company with a hot drink. As such, I provided a hot water urn and all the bits so grown-ups could help themselves to drinks, and I placed a little collection pot alongside inviting donations. That's how I first started Cookery Doodle Doo’s charitable support, and in that first year I raised over £100 for Naomi House - I was utterly thrilled!

“I try to take little opportunities as they present themselves. For example, a session in which I should have been making a 'kid and carer' lunch with 12 of Hampshire's Foster children was cancelled that same morning due to heavy snow overnight. We rescheduled, but obviously I already had all the ingredients for 24 portions of Halloumi Kebabs and Rice Salad prepped and ready to go. I made up little kits and anyone in my village local enough to walk through the snow came to collect them in return for a donation. It's not hard to find opportunities like that here and there. Every Easter, on/around my business birthday, I count up my collection pot and donate what's in it to Naomi House & Jacksplace - after 5 years the running total had reached £564.64!

“The lockdown obviously put an early end to the sixth 'collection year' and my business closed overnight. Suddenly I found myself, like most other parents, without enough to do, and the unappealing prospect of homeschooling being the only 'highlight' of my days. It occurred to me that creating a new recipe for our range, filming it and then sharing a cookalong video every week would not only keep me occupied, but also provide easy 'home ec' lessons for all my customers. All they needed to do to join in was buy the ingredients I shared in advance (making sure everything was easily available), and follow the prep list I provided (again using equipment I thought most households would have). I've never been filmed like that before, never edited a video, never had a YouTube channel - so I've learned lots of new skills and I've 'met' so many lovely new people online as a result of the videos - there will be 21 by the time I plan to finish at the end of July. 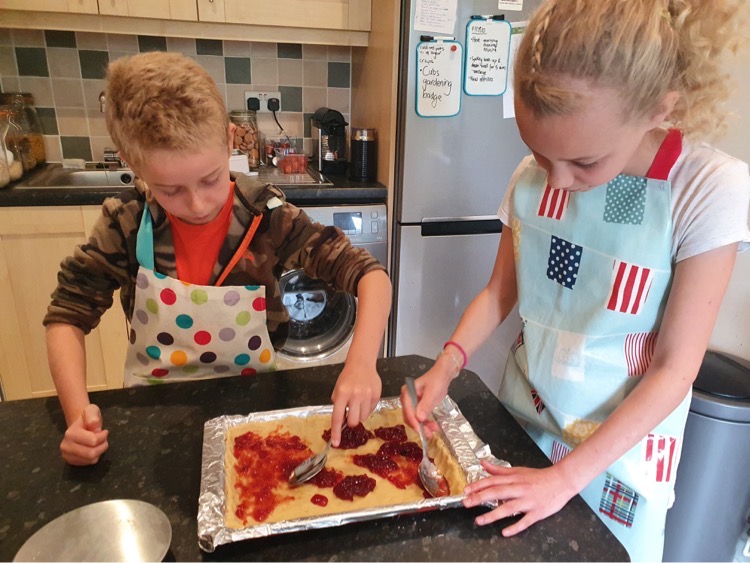 “Despite my business being closed, I didn't want to charge for the videos - they only cost me my own ingredients (and obviously we ate all the results!), plus time, which I had plenty of. I was also painfully aware that almost everyone's incomes had been affected overnight and I was determined that my videos would be accessible to everyone who wanted to use them. I firmly believe that cooking is a vital life skill - it provides relaxation, social opportunities, nourishment, cost-savings, reduced packaging waste and so much more  - and sharing that love is what I do. It felt like the wrong time to try to profit from it, but I did realise that there was the potential to fundraise instead. I decided to wait until things looked a bit more positive though, so people would hopefully be more sure of their incomes before I mentioned it.

“Launching the fundraising yesterday, I knew a few loyal customers would donate, and hoped a few more who'd discovered my videos would join in. I set a goal of £150 and privately hoped for maybe £200-£250 by the end of July with the final video. I literally couldn't believe it when the donations started coming in and by the end of the first 24 hours, we'd raised £388! I've had to increase the target and now want to try and get this one year to match the previous five years - so my new goal is £565. 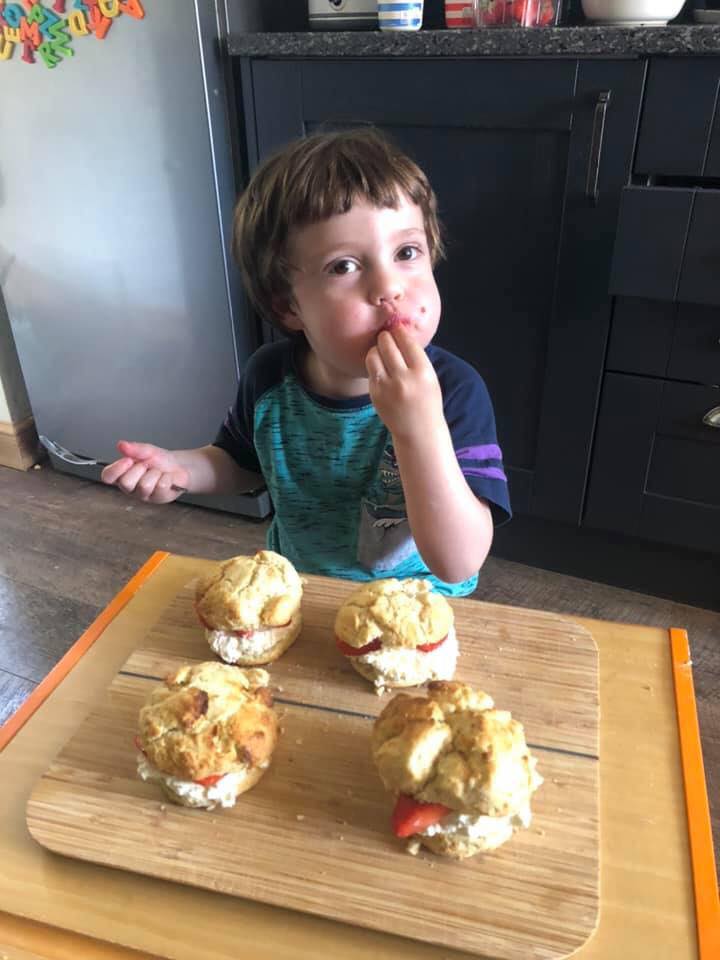 “Throughout the project, there have been opportunities to create new seasonal recipes; I developed some Hot Cross Scones for Easter, and a Beer Bread for Father's Day, otherwise I've tried to alternate sweet and savoury to fit in with my belief of treats being totally fine as part of a healthy balanced diet. It's probably unsurprising though that the most popular recipes have been sweet ones - the runaway success was my Lockdown Brownies (or Blondies in case people didn't have cocoa powder) which were featured in the second video I produced. People still mention the recipe now and I know lots of people are making them quite regularly! Recently I've been able to start producing baking kits and lesson plans for nurseries and childminders to use alongside the videos and the first recipe every setting does is those brownies; they're so popular! 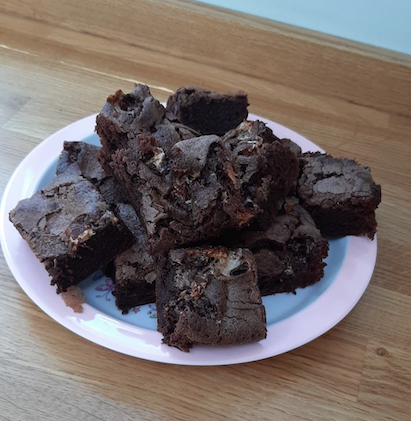 “My videos have been seen by hundreds, possibly thousands, of people and they are a bit homespun (I had to stop one halfway through when my washing machine got too loud in the background!) and there's the odd stutter or terrible mum joke, but they're just like how I teach my normal classes in that respect and so I've never minded them being a bit rough around the edges. I wanted it to seem as if I was standing next to each family in their own kitchen, helping them. I just can't wait until they're back in my kitchen instead!

“What's been particularly lovely for me personally is all of the comments - one mum donated a hugely generous amount within hours of the first request and said, amongst other lovely things, that my videos had been a shining light and would forever be one of the positive things about lockdown for them. I cried like a baby when I read that, and then cried again several hours later when I read it to my 10 year old daughter and saw her pride in me! She was almost as impressed when she discovered I'd become a YouTuber!

“Someone else said they'd made lots of batches of my Fairy Ginger biscuits (a very sentimental recipe for me as I was trying to recreate childhood memories of baking with my own grandma) as treats for loved ones, and even took some camping with them - what an honour to create a new family favourite like that.

“I’m so thrilled to have been able to provide a bit of positivity and happiness during this pandemic and support a wonderful charitable cause at the same time.”

And to show Cookery Doodle Doo your support, you can donate to their Facebook Fundraiser here.